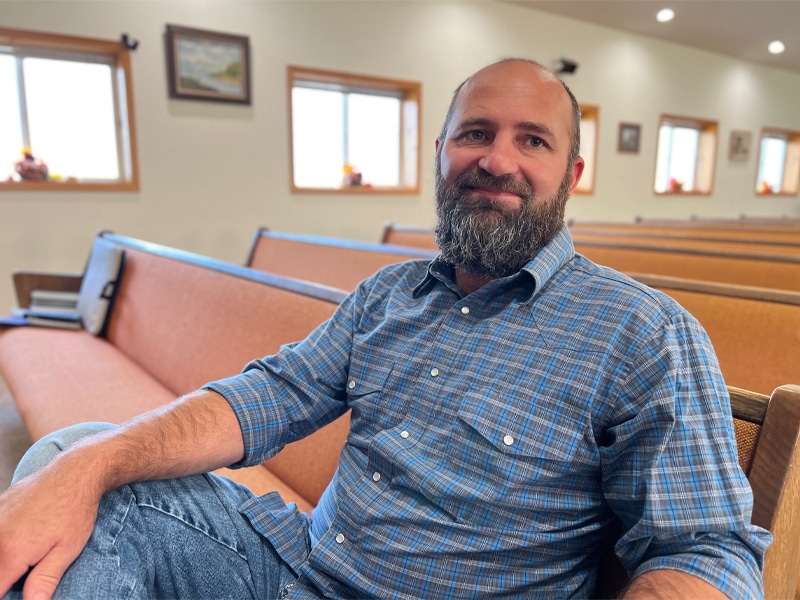 Shortly after moving to Idaho in 1984, my mom sat me down and showed me that lying and disobeying my parents was a sin and that sin had a consequence of eternity in Hell. I repented of my sin and asked the Lord Jesus to save me.

In 1996 I began working as a carpenter/house mover, and I’m still a carpenter/contractor to this day! In 1997 I married my beautiful wife and have four children, three girls, and a boy. In 2004 I started Bible college and I knew the Lord was calling me to pastor within a year.

After graduating I was the assistant pastor at Sagle Victory till 2014, we then attended Kootenai Community Church. In September of 2015, I began pastoring here at Laclede Community Church!

After spending nearly 25 years in the military as a Combat Engineer, trying to handle life’s challenges without Christ, I realized that He has always been with me, calling me to Him, but I was not listening. It was my ideas and my successes, not His. Once I repented and put my faith in Christ, I was directed to Idaho to do His work.

Having visited my niece several times in North Idaho, I felt the Lord directing my path. I sold everything I had and moved to Laclede. Shortly thereafter, I started attending Laclede Church in 2011, and have since enjoyed the life the Lord has brought me.

Several years later, I became installed as an elder of our wonderful Church. The Word has truly set me free–just the Gospel, the WORD, and nothing but!!

Helen Campbell and Nellie Kirkpatrick started a Sunday School in Laclede. Over the years they used the old Grange Hall and the Laclede School House. Occasionally a minister would come from Village Missions to hold Church Service at night or Bible School for the children.

In April of 1967, the church members decided they would like to build a real church for worship! On February 20, 1968, Patsy’s mother Dorothy Mae Kurtz deeded a piece of her property to the church. The first section of the church was built which included a sanctuary and two classrooms with an outdoor toilet.

Ed Skudler from Priest River came and pastored the church for a season then Buford Cates pastored for a time. When Buford left, the men of the church took turns bringing the message, and soon they wanted Dan Moore to become their pastor. Dan was ordained in 1977 with Chuck Wigton from First Christian Church conducting the ceremony. The board of directors at that time were William Moore, June McCracken, Helen Campbell, Myron Watts, Mary Farmer, and Dorothy Kurtz.

On October 5, 1979, Jack and Jackie Brooks deeded a piece of property to the church that adjoined the south of the church property. So two more classrooms and two bathrooms were built.

On April 3, 1987, the church purchased the brick house that adjoined the church property to the north.

In 1996 the house was torn down and the third phase of construction began. At that time a fellowship hall, kitchen, and handicap bathroom were added on. A portable wall was installed between the sanctuary and fellowship hall in case of a large crowd.

As attendance increased, Steve Ennis was ordained and became the associate pastor for 6 years.

In 2004 the fourth phase of construction was finished. This included a new sanctuary, storage room, another bathroom, and baptismal. It is amazing to us how the Lord supplied all the finances we needed to complete each stage of construction without having debt. WE SERVE AN AWESOME GOD!

In 2015, Dan Moore retired and the church welcomed Josh Jones as Pastor.